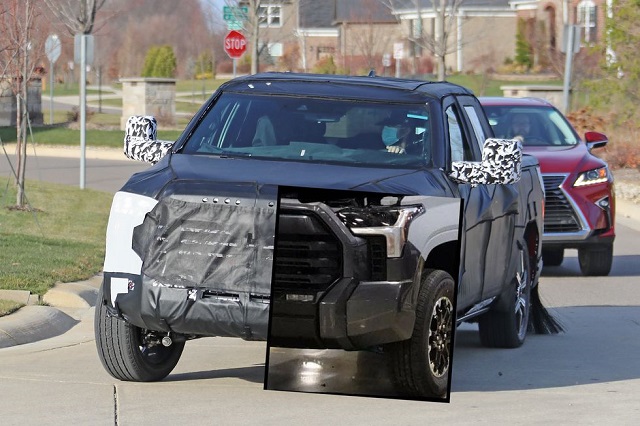 The full-size Toyota Tundra competes with some of the best-selling vehicles on the market and most of them have been redesigned recently. The Tundra itself has been around without the redesign since 2007 and it failed to reach the brand’s expectations. With average US sales of 110, 000 units since the beginning of the previous decade Toyota’s full-sizer hasn’t been up to the brand’s projection of 200, 000 units per year. The model has about 17 % of the market share in the full-size half-ton class where Ford, Ram and Chevy models are the dominating force. However, the brand is putting final touches on the all-new 2022 Toyota Tundra and reports promise significant improvements in all aspects.

The third-generation Toyota Tundra has been spotted in the prototype form on several occasions and it promises significant styling changes. Reports indicate also that the all-new Tundra will switch to the new platform and abandon the naturally aspirated V-8 engine in favor of the twin-turbo V-6 unit that should also be available in the hybrid version. The new model should also come with a redesigned cabin and with the brand’s latest in-car technologies.  Toyota will again offer the new Tundra in various body configurations and trim options including off-road-ready TRD-branded versions.

Toyota hasn’t yet revealed many details about the upcoming, all-new 2022 Toyota Tundra but spy photos and recent reports suggest to us what we should expect from the redesigned full-sizer.

The fourth-generation Tundra should switch to the new ladder-chassis platform known as the F1 as the reports claim. It’s not known much about the new platform but reports indicate that Toyota will use it as the global truck platform that should underpin all brand’s trucks in the next decade including the mid-size Tacoma and global Hilux. The platform should use a higher percentage of high-tensile steel and lightweight alloys that will provide better structural rigidity with saves in weight. It will also allow the implementation of the hybridized powertrains.

From the visual perspective, spy photos promise radically new styling. The model should arrive more aggressive front-end design with the redesigned grille and headlights. The grille should share some similarities with the design of the recently refreshed, mid-size Hilux but the unit used on the full-size Tundra looks more robust. The grille will keep the horizontal slats but will have a more imposing shape and design. The model will also get attention with the new headlights with the Y-shaped signature lighting.

The profile of the model seems to have subtly sculpted fender flares and door panels. The model will also get a redesigned tailgate and taillights. It’s not clear would Toyota introduce the multi-functional tailgate design as is the case with the best-selling models in the class.

The cabin of the all-new 2022 Toyota Tundra should also be thoroughly reworked but it’s not clear yet what design pattern Toyota will use.

The model should go on sale with the redesigned dash and improved seat comfort. The model will also use the brand’s newest in-car technologies.  Like the class leaders, Toyota should also introduce a large touchscreen option likely a 12.36-inch unit. What is sure Toyota will equip every version with its Safety Sense driver safety and assist systems. Available will also be numerous cameras for better situation awareness including the underbody camera in the off-road-ready trims.

The redesigned 2022 Toyota Tundra will benefit from the new, lightweight platform and it should also replace the current non-turbo V-8 engine with the twin-turbo V-6 unit that should also be available in the hybrid application.

The current Tundra exploits a 5.7-liter V-8 engine good for 381 hp and torque of 401 lb-ft. The new-generation version should switch to the 3.5-liter twin-turbo V-6 unit sourced from the Lexus LS sedan as the reports claim. The V-6 engine makes 416 hp and torque of 442 lb-ft in the luxury sedan but it should be tuned differently for the pickup truck application. The hybrid powertrain based on this engine should also be available with an estimated output of around 450 hp and torque of 500 lb-ft. The hybrid version should provide 30+ mpg.

More precise details about the redesigned 2022 Toyota Tundra should appear soon. The model should go on sale in the last quarter of 2021 with the debut earlier in the year. The current version is available from $33, 675. The all-new model should have a slightly increased price across the range.