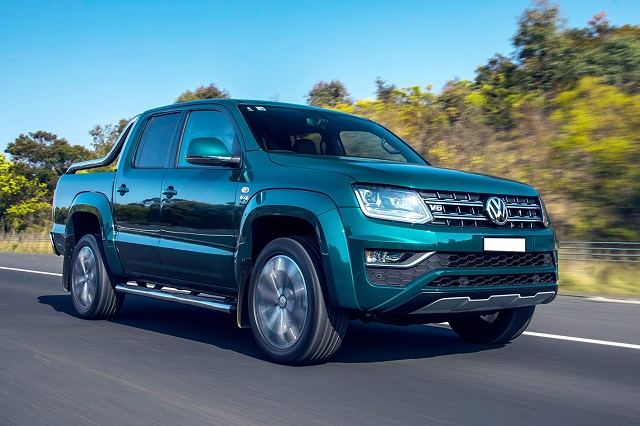 The proliferation of the pickup trucks continues worldwide and modern utes are getting many forms and premium levels. The high-performance versions are also in the focus of the truck buyers. The VW Amarok is a representative of the modern, mid-size truck with plenty of refinement and standard equipment.  This truck handles well on the road… 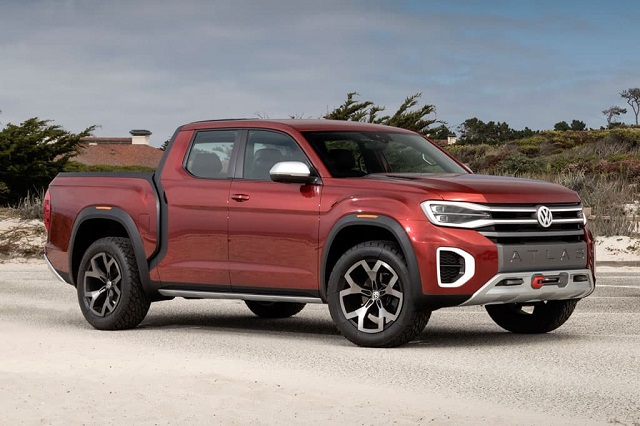 VW continues to roll out new and redesigned SUV models and the brand is also in the “electric offensive”. However, the largest car maker announced recently a joint venture with the Blue Oval Brand and as the result of the partnership the next generation VW Amarok will be based on the Ford Ranger. The new… 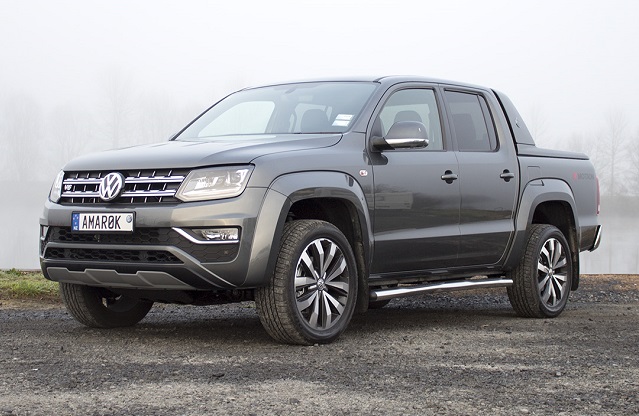 The fierce battle in the mid-size pickup class continues on the global market with more models and options emerging but with the Amarok model VW has the winning formula. Limited to the dual-cab body style and equipped with different power outputs turbodiesel V-6 in the combination with the 4Motion all-wheel drive, the Amarok Ute has proven as one of the best picks in the class. VW upgraded the V-6 to the limits in the power-bound version and delivers also different style and luxury level interiors and exteriors.

VW has also recently hinted what is in perspective of its successful ute. The V-6 reached its limits and the missing safety features should also appear in the Amarok but VW said there won’t be major upgrades until the next generation version. And the next generation Amarok should appear sometime between 2020 and 2022 with the new styling and more safety equipment. The sources also claim the joint venture with the Ford Company as the new-gen Amarok could share the T6 platform with the global Ranger model. That move is to reduce production costs and we have more examples of that kind in the industry. Mazda will also switch to the Isuzu’s platform for its BT-50 model while Mercedes X-Class employs Navara’s underpinning.

As for the next 2020 VW Amarok version, there won’t be significant upgrades. VW won’t boost the power of the V-6 turbo further and won’t bring more advanced safety system for the 2020 version. To keep the focus on the model, the brand will likely offer new limited-edition versions and make some reorganization in the equipment levels. 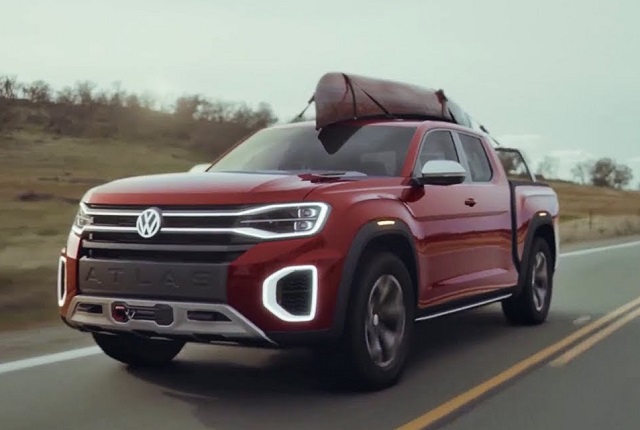 While Volkswagen performs very well with the mid-size Amarok pickup truck on the global market, the SUVs are the material with which this brand builds in the US. However, after VW introduced the American taste, mid-size Atlas SUV, the Atlas Tanoak Concept debuted at the 2018 New York Auto Show and possibly announced the arrival of another unibody truck to the US. VW said that the production version isn’t in the plan but the brand certainly wants to feel the pulse of the buyers.

The Tanoak Concept is derived from the three-row Atlas SUV and except the flamboyant exterior style, it borrows much from the SUV model. With the Pilot- SUV-based Ridgeline truck and Hyundai’s promise to bring the unibody pickup truck by the end of the decade, the Tanoak Concept-based truck would another unibody construction and the SUV-like-driving mid-size pickup truck on the road.

And despite VW claims it has more room for improvement in the SUV range in the US the pickup truck version would bring new buyers and open a new money-making market for the brand. And really, VW wouldn’t need much effort to transform the concept model to the production-ready form. So, despite that no signs from VW that the new truck comes, how would it look and perform if it arrives as the 2019 Volkswagen Atlas Tanoak Pickup Truck. 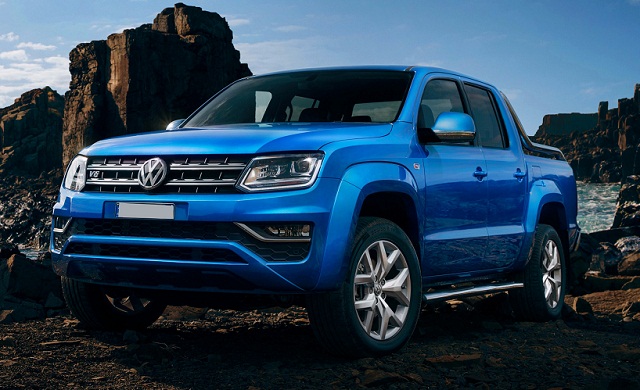 The VW Amarok is among the best and freshest one-ton pickups on the global market. Recently redesigned in late 2016, the model boasts refined and smooth V-6 turbodiesel engine combined with modern exterior and interior design. The model is also packed with modern tech and convenience features but lacks some of the active safety systems. VW upgraded model’s towing capacity to 3, 5 tons thanks to some structural upgrades for the 2018 model year but there haven’t been other powertrain or equipment changes. Luckily, the price also remains in the same range.

As for the upcoming, the 2019 VW Amarok version, reports suggesting some equipment and lineup upgrades but a new more powerful version is also possible. Additional, up-scale trim option is also reported plus VW might add some of active driver assistance systems. 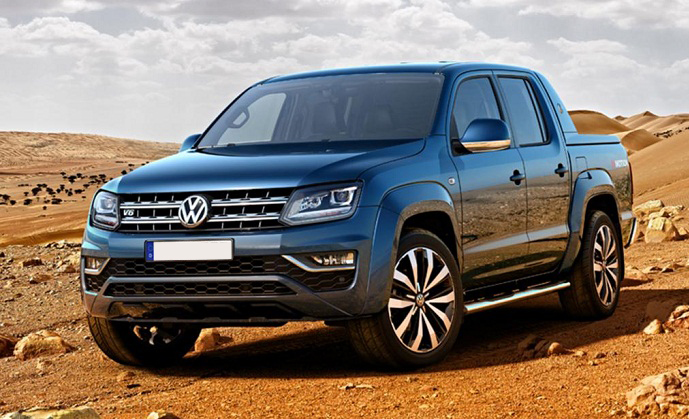 A long-awaited update of the VW Amarok made big waves in the truck industry since everybody was surprised when VW launched this impressive truck with the new V-6 turbodiesel engine. While most brands going with downsizing and turbocharging, VW decided to replace the old 2.0-liter four-cylinder turbodiesel with the V-6 Euro 6 compliant turbodiesel which provides class-leading towing capacity and performance. However, the new engine is hidden bellow refreshed exterior and Amarok also has the new and refined interior. But the 2018 VW Amarok V-6 Diesel should also bring some improvements like the new safety features and more standard equipment. 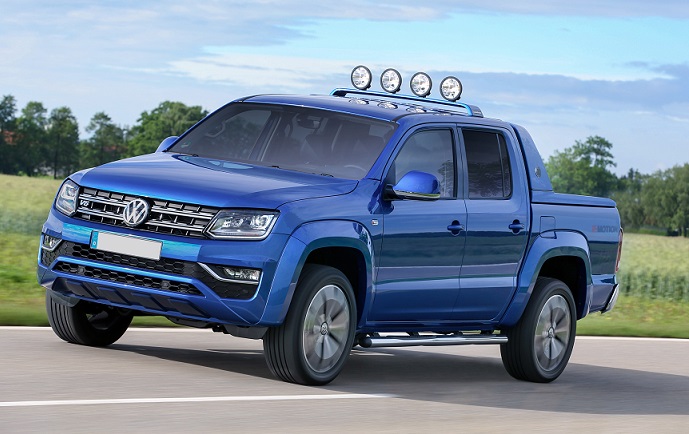 Among the best one-tone utes in many markets around the world except US you can again count on German’s quality in great VW Amarok. This model brings to you the only class-available V-6 turbo diesel which outpowers all rivals which currently use engines with fewer cylinders. Aside from that with this truck you also get good ride quality followed with class leading towing capacity and car-like interior. It is also loaded with many convenience and tech features but lacks some safety kit that is available as standard in some rival models. The 2018 VW Amarok might fix this.

The facelifted 2017 Amarok responds on many updated rivals like Mitsubsihi L200, Nissan Navara and Ford Ranger with upgrades on all fronts. Surprisingly it traversed to V-6 turbo diesel units form four-cylinder engines that meet Euro6 regulations. Improvements are also on braking system, towing, styling and interior. What remains for the 2018 version is to expand safety kit and this model might bring currently missing rear seat airbags and more advanced safety features. It might also bring more standard features and new colors. 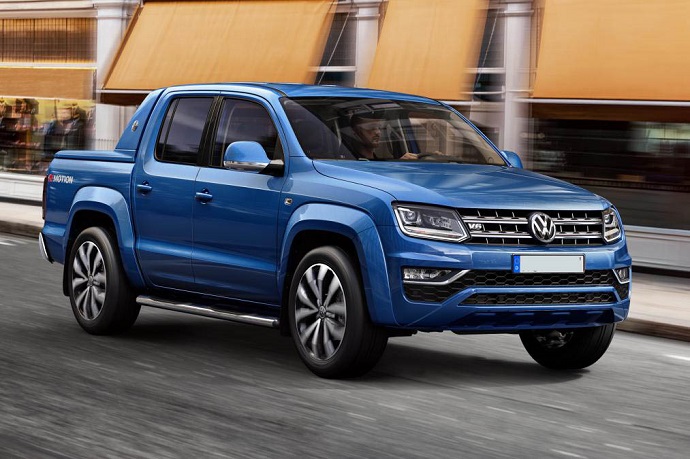 One of the strongest contenders in pickup segment is certainly VW’s Amarok model. It has been present in the similar form since its introduction in 2010 model year and after all its main rivals presented their improved versions, VW is forced to answer in similar manner. The answer will come in form of the facelifted 2017 VW Amarok which has to offer smaller or greater upgrades on all fronts.

No doubt, the biggest change is new V-6 turbo diesel engine which makes this model the sole pickup truck that is powered with V-6 displacement. New engine is compliant with Euro6 standards and in top-spec version it overtops the main rivals in both power and torque. It also brings 500kg improvements in towing ability over the current model and with it is now in line with top rival models. The model will also promote some exterior changes and interior will be upgraded as well. It will also offer three drivetrain options including two-wheel and selectable or permanent four-wheel drive configurations. 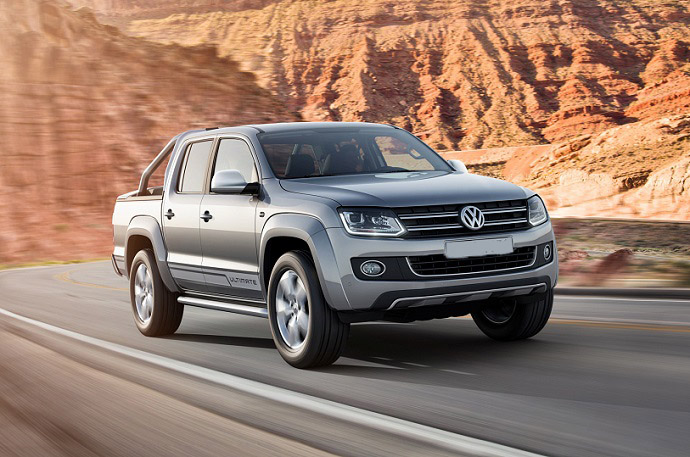 Another product from automobile giant Volkswagen Commercial Vehicles is VW Amarok, the entry pickup model for this brand. It was introduced in 2010 and depending on the market it is available in single cab and double cab configurations. Like all VW’s vehicles, the Amarok features good build quality but also slightly higher prices than some rival models. The model offers two diesel engine options and while it lags behind some rivals on capacity it wins in terms of power and fuel economy. It comes in rear wheels drive configuration but it also offers selectable or permanent four-wheel drive models which are more suitable for those who want this model as working truck or need enhanced off-road ability.

Some Amarok models are available with Bluemotion technology which promises improved fuel efficiency. On the other hand, this pickup truck is one of the largest vehicles in its class and offers one off the widest cargo beds. Where this model is also in the top end among the rivals is ride quality where its handling and comfort can be compared with more passenger oriented vehicles. The model also offers wide range of models which covers everything from base work truck versions to well-equipped dual cabs. The 2016 VW Amarok is faced with rivals like Nissan Navara, Mitsubishi L200 and others.